It’s a battle of good vs evil when the elfin folk don their armor and rush to victory in Cash of Kingdoms slot game from Microgaming. A picturesque backdrop of placid, snow-topped mountains, and green valleys, the war rages on as the curious little characters tumble, grumble, and rumble on the battlefield. There’s an amorous archer, a mumbling magician, and a swanky swordsman among the symbols, plus awesome special features. 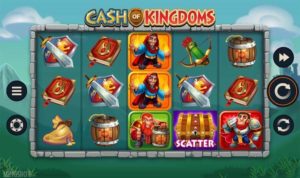 Features and Symbols in Cash of Kingdoms

There’s a rumble in the valley as the little hordes of magical creatures prepare for battle. Watch out or you could be swept up in the skirmish in Cash of Kingdoms slot game. Expanding wilds, stacked wilds, and a massive free spins feature all gel marvellously to create a fun-filled slot game. Crisp graphics, animated characters, and special features add to the flavour of this unique pokie game. Players can win up to 20 free spins, with exciting multipliers and fifteen fixed paylines, this pokie is sure to set the reels on fire.