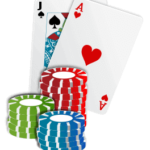 Players can enjoy various games of blackjack online. All the variants are similar to the original game of 21, but feature their own set of rules and strategies. These different ways of playing blackjack offer players alternative ways to test their blackjack skills.

The game of blackjack was first played in the 17th century. The goal is to get a hand total as close to 21 as possible. Players also wins if they have a higher hand total than the dealer or if the dealer busts.

With online blackjack, players have different variations to try. With these blackjack games, the rules may differ slightly. The house edge and strategies will differ as well. Let’s take a look at the eight most popular blackjack variations to brace the internet.

Blackjack Casinos with the Most Variations

European blackjack is one of the most popular blackjack variants you will find.

This variation offers one of the most twists and as well as some other rules changes.

Atlantic City follows most of the classic blackjack rules. The few differences include;

There are several blackjack variations for casino players to enjoy. Each variation comes with its own strategies and rules. Try your lucky hand and improve your blackjack skills at top kiwi blackjack casinos.